After wrapping up a few days in Napa, the girls said goodbye to the guys and we were off to SF separately! The brothers had several more guys fly in to join them for a few days of Royals games and sights in San Francisco. The sisters-in-law had a day and a half there to do the stuff we thought looked like fun without them cramping our style! The rental car came in handy as we had about an hour drive. During this drive, our one and only stop between cities was In-N-Out because animal style burgers are everything (iykyk).

Driving in San Francisco is the worst because of very limited parking, so we dropped off our rental and grabbed an Uber to The Metro Hotel to check in. We changed into pants because it was cooler than Napa and Ubered to Battery Boutelle on the South (San Francisco) side in the Golden Gate National Recreation Area. From the Battery, we walked the California Coastal Trail east, crossing under the bridge to the Golden Gate Postcard Viewpoint. Then, we continued walking onto the Golden Gate Bridge. Views were gorgeous from all sides of the bridge, however the side closest to the Battery was partially under construction.

The walk from Battery Boutelle to the H. Dana Bowers Rest Area & Vista Point was just over 2 miles and took us about 45 minutes.  As we walked, it was windy and loud, but gorgeous! You can also cross the bridge by bike (easy to rent), if you’d like to take in the sights but get to the other side a bit quicker. Seeing the bridge in person and walking across it was pretty awesome! It’s incredible to think about the engineering feat that had to happen in the 1930s to build such a structure!

Once we made it to the North (Marin) side in Sausalito, we turned right into the parking lot and walked over to the cobblestone wall where many people were gathered to take pictures. Such a gorgeous view!

After taking in the views from the Sausalito side, we Ubered to The Trident for dinner. The restaurant’s reviews are good, but I’m convinced this is due to the incredible views looking back to San Francisco. We were underwhelmed by the food and the service was poor from the time we walked in and waited for someone to arrive at the hostess stand (though the restaurant wasn’t even half full) to the end of our meal when our waiter was annoyed by our request to fix numerous mistakes on our checks. I’d recommend trying Scoma’s. That was where we really wanted to go. It was highly recommended by a friend and had great reviews, but they were closed on Tuesdays.

After dinner, we walked southeast to the Bridgeway Promenade to take in a bit of the city. Unfortunately, our dinner had taken so long that most of the cute shops had closed at this point. I would love to go back to this charming town and spend an entire day!

My sister-in-law, Lacy had to fly back to Kansas City, so Kelly and I bid her farewell as we left the hotel at the crack of dawn. We had a busy day ahead of us! Our first stop was the famous Painted Ladies (on Steiner Street, just past the intersection of Steiner & Hayes) across from Alamo Park. Sometimes known as “Postcard Row”, these multi-million dollar Victorian mansions featured on the Full House intro didn’t appear as colorful as they’ve apparently been in the past. We couldn’t help but wonder if this was intentional so that tourists would stop photographing their homes!

We made our way via Uber to the 16th Avenue Tiled Steps (AKA Moraga Steps), which are where Moraga Street meets 16th Avenue. Neighbors in Golden Gate Heights wanted to beautify the neighborhood, so in 2003 they collaborated with Artists Aileen Barr and Colette Crutcher to create a sea-to-stars mosaic with tiles going up 163 stairs. It really was impressive and we were the only ones there!

Finally, it was time to eat! We had breakfast at Zazie. It’s a small, French bistro that’s menu contains prices that have a living wage with benefits factored in. Because of this, the restaurant is tip free! What a novel idea! I ordered my favorite, croque monsieur. It was delicious and we had fantastic service!

Part of the appeal of San Francisco is all of the unique and charming neighborhoods. No two are alike! After breakfast, we explored two neighborhoods: Haight Ashbury & The Castro. Haight Ashbury is a lively neighborhood with a hippie vibe. It’s colorful and filled with funky, vintage stores and head shops. Most of the shops in this area weren’t open yet so we just strolled through. Next, we made our way to The Castro. It was one of the first gay neighborhoods in the US! It’s home to the Castro Theatre, the GLBT Historical Society Museum, and fun rainbow crosswalks! It happened to have some of the most beautifully landscaped yards. What I wouldn’t give to be able to grow succulents year round! This neighborhood supposedly comes alive at night so we were sad to not have time to go back.

Because we are the tourists who can’t stop eating and trying all the things, we grabbed frozen hot chocolates at Dandelion Chocolate before heading to Chinatown. Reese LOVES hot cocoa, so I grabbed her some of their custom mix as a souvenir.

While we didn’t eat or shop in Chinatown, it WAS great for photo ops with statues! Ha!

We made the insane hike up Telegraph Hill to check out Coit Tower before heading over to Lombard Street. It was packed full of tourists and insane brave drivers. By the end of the day, we’d walked 11 miles and climbed 50 flights. I fully attribute the flights to this portion of the day and we will always remember it as the time I almost died.

Ghirardelli Square was a very touristy area. The highlight was definitely San Francisco Brewing Co. After surviving Telegraph Hill, nothing sounded better than an ice cold, local craft beer and cheddar bacon tots covered in beer cheese. We ate them before I could get a picture but just trust me, these tots alone are worth the trip to SF.

Although we loved checking out all of the murals in Umbrella Alley, it wasn’t as big as we expected it to be. Still super cute though and worth the stop!

After Umbrella Alley, we walked a minute down the street to Buena Vista Cafe. I guess there’s often a line to get in. While it was crowded, we were able to walk in without waiting by agreeing to sit at the bar. Be forewarned though, they won’t serve you food at the bar. The restaurant opened in 1916 and is world famous for their Irish coffee. Even though I don’t like whiskey, I obviously had to try one. It was delicious!

Fisherman’s Wharf is right down the street and was another super touristy area. There were tons of souvenir shops and several street performers. There were stalls selling everything from ice cream to corn dogs and clam chowder in bread bowls. This area definitely had more kids and families than any other part of San Francisco we’d been to. We walked through some shops and took in the view before heading to dinner at Fog Harbor Fish House.

We walked off dinner on our way to Pier 33 where we caught the 6:30 ferry to Alcatraz Island. Kelly purchased night tour tickets online several months in advance. We both LOVE all things spooky and hoped that the night tour would leave us slightly creeped out. We got to the pier about 20 minutes early and boarded our ferry promptly at 6:30. All tours depart from and return to Alcatraz Landing.

While we leaned a lot about the history of Alcatraz, how the inmates spent their days, and who some of the most famous inmates were (think Al Capone and Machine-Gun Kelly), we didn’t find anything about the night tour scary. Was it a bit eerie walking out onto the grounds in the cold, dark air surrounded by the old, large buildings on an empty island that once held some pretty crazy hardened criminals? Yes. But we didn’t hear stories of any rumored hauntings or even get to see the hospital wing (it was closed). So if you don’t like scary stuff but the night tour is all that’s available, I wouldn’t hesitate to book it. You’ll be fine. Regardless of what time of day you go, plan to spend about 2 hours on the island.

SF was somewhat of a whirlwind, but we were so glad that we extended our trip to (barely) scrape the surface of of what the city has to offer. After five total days away, we flew back to relieve the grandparents! Always grateful for trips away with these people. 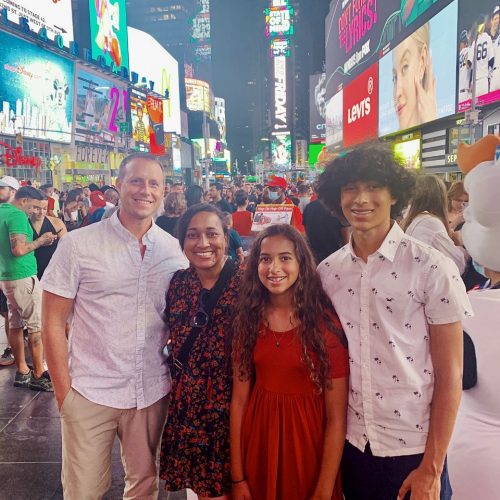 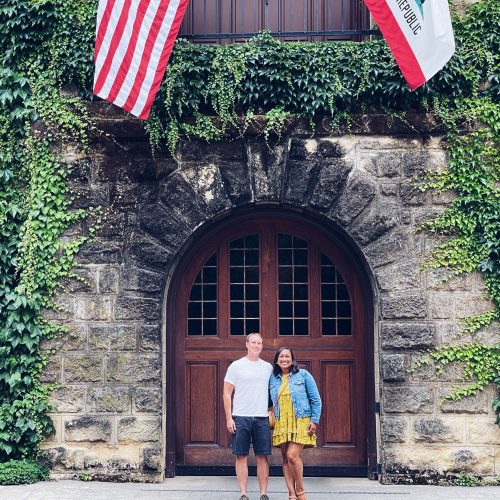 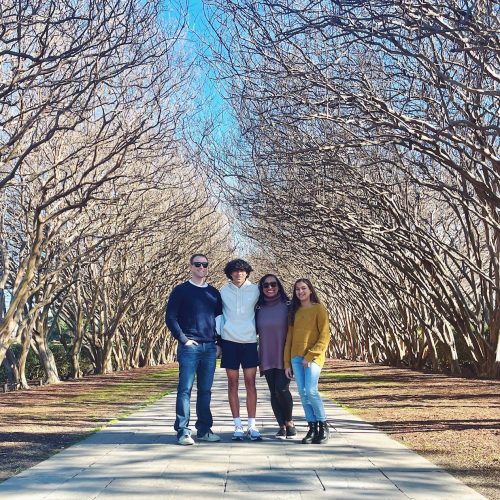 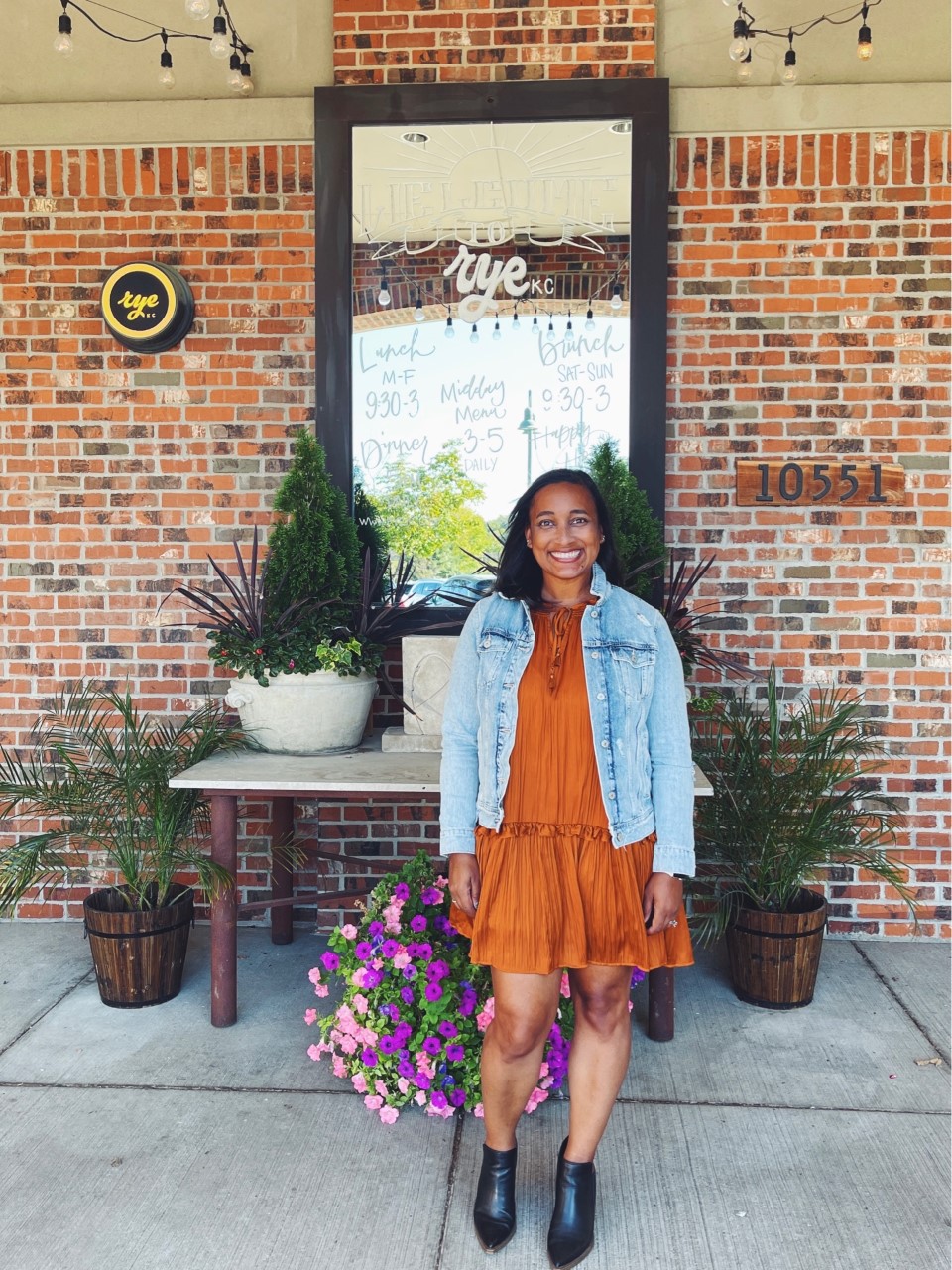